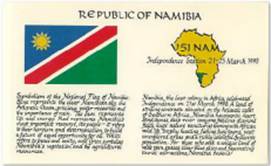 The Namibian Amateur Radio League (NARL) was founded in 1990 which coincides with the independence of the Republic of Namibia.

1968 - 2010
A chronic has been compiled for the 21 anniversary of the Namibian Amateur Radio League (NARL) and also in celebration of the 21 independence anniversary celebration of the Republic of Namibia.
This chronic dates from 1968 - 2010. It is an interesting peace of amateur radio in Namibia and can be downloaded below. You will need Adobe Acrobat Reader.

2010 - Present
Please refer to our News and Bulletin pages for more recent news on what's happening in Amateur Radio in Namibia.

The NARL logo is derived from the international symbol for amateur radio, included in the logos of many IARU member societies. The diamond holds a circuit diagram featuring components common to every radio: an antenna, inductor and ground.